It has been an ongoing priority of the State of New Jersey to improve its infrastructure for their 8.6 million residents. Overseeing the infrastructure improvements is the New Jersey Department of Environmental Protection (NJDEP), the government agency responsible for managing the state’s natural resources and pollution control issues.

MCUA was founded in 1950, in part, to protect and enhance the vital marine habitat in the Raritan River and Bay by collecting and treating wastewater from nearly 800,000 people. Similar to many utilities, MCUA is charged with the upkeep of their aging infrastructure with dwindling dollars.

This project is part of an overall goal to provide a redundant means for sewage conveyance from MCUA’s Edison Pump Station (85 MGD) to their Central Wastewater Treatment Plant (400 MGD). The project consists of two parallel 3,940-foot long pipelines constructed in a tunnel beneath the 3,000-foot-wide Raritan River and some shorter connections constructed in open trench excavations on the pump station and treatment plant grounds.

Under Phase Two, a 3,940 linear foot, 15.5-foot diameter tunnel was constructed under the river. This tunnel has several uses with the most important being the connection of the Edison Pump Station, one of five contributing pump stations, to the Central Wastewater Treatment Plant. Within the primary tunnel are two parallel force mains. The new dual force main will replace MCUA’s existing 60-inch diameter Arsenal Force Main, which was installed in 1969. The existing line made of prestressed concete cylinder pipe (PCCP) is supported on piles and is located several feet below the naviagble riverbed and dredged river maintained by the Army Corps of Engineers. Thie Arsenal Force Main accepts continuous flow of wastewater from the northern part of the county serving over 200,000 people. Since the pipeline has been in continuous service for 40 years with no ability to be inspected internally or externally, there was concern that the prestressing wire could fail, causing a catstrophic pipe failure and an uncontrolled discharge of raw sewage into the river.

To avoid the risk of a system failure, the NJDEP, through an Administrative Consent Order, required MCUA to construct a new redundant pipeline under the Raritan River. The first design concept was to build a tunnel in lieu of open-cutting the river and install a single 60-inch diameter pipe and after it was placed into service, rehabilitate the existing PCCP pipeline to develop a dual pipeline system. After researching potential rehabilitation techniques and the possible cost and risk to rehabilitate a 40-year-old pipeline, it was determined the most practical and economical solution was to enlarge the new primary tunnel diameter and install two new pipelines in lieu of rehabilitating the older PCCP pipeline. The new redundant line will allow for one line to be shut down and inspected or repaired without flow disruption, providing for a safe, long-term solution.

Hatch Mott MacDonald of Freehold, N.J., was hired to design the new system. Angelo Bufaino, PE, senior project engineer of the firm, explained their concerns, which included both installation and long term performance criteria. “MCUA wanted a pipe that was corrosion resistant both inside and out. Since the line was carrying raw sewage, the Authority wanted a pipeline that would be resistant to the byproducts of hydrogen sulfide gas (sulfuric acid). Additionally, as the pipe was to be installed within a damp tunnel and partially encased in concrete, there would be no means to perform external repairs if external corrosion occurred.

“Centrifugally cast, fiberglass reinforced, polymer mortar (CCFRPM) and high density polyethylene (HDPE) were the only two pipes considered to meet both internal and external corrosion resistance. HDPE presented a concern in installation because of potential thermal expansion and contraction with varying wastewater temperatures. CCFRPM had the better thermal properties.Aside from the design aspects, because the pipeline was being constructed within a 3,900-foot-long tunnel, it had to be light enough to be transported through the tunnel and lifted to be set to grade. The CCFRPM pipe provided benefits with regards to weight and jointing, making installation easier.”

Because of these reasons, CCFRPM pipe was the only material specified for the force main.

Kenny Construction Company, headquartered in Northbrook, Ill., was awarded the tunnel portion of the project and purchased the 7,785 linear feet of 60-inch, 100-psi pressure class, 46-stiffness pipe from Hobas Pipe USA. Kenny Construction had utilized the product on several past projects.

Successful Construction
Two deep access shafts were required on each side of the Raritan River. Kenny Construction Company (KCC) subcontracted Bencor Corporation of America, a specialist in deep foundation work, to construct the shafts. Slurry wall construction methods were used to create the Southeast 36-foot diameter, 87-foot deep launch shaft and the 28-foot diameter, 70-foot deep Northwest receiving shaft. “In lieu of the specified jet grouted plug below the base slab to prevent soil heaving at the Southeast Shaft, Kenny Construction chose to excavate the final 15-feet of the shaft under water. Upon reaching an excavation depth of 70 feet, the shaft was flooded and the remaining 15 feet of soil was excavated underwater. Professional divers were then brought on site and they verified the depth of the excavation as well as to set the final rebar mat and place the tremie concrete slab,” stated Bob Rautenberg, project manager for Kenny Construction Company. The two shafts are permanent and will remain after the project is completed.

The MCUA decided to leave the tunnel partially open to permit inspection of the pipelines and to permit future utilities to use the corridor to cross the 3,000-foot-wide Raritan River. In the final construction, two additonal 16-inch diameter HDPE pipelines were installed to convey landfill gas across the river.

“The Contract Documents specified the use of a pressurized face tunnel boring machine due to the presence of soft ground deposits and potential flowing soils under atmospheric conditions,” stated Julian Prada, the resident engineer on the contract for Hatch Mott MacDonald. “KCC chose to use an EPB boring machine for the tunnel construction due to the soft ground conditions. Soil was mined with a rotating cutter head, and a screw conveyor carried a controlled volume of soil, allowing the contractor to control the amount of soil excavated. By this process, the boring machine supported the ground during excavation, balancing the earth pressure. Preservation of the insitu soil was especially critical since the existing 60-inch diameter force main alignment was within 15 feet at one point. The 3,940-foot long tunnel hit its target for both line and grade.”

Once the primary liner was in place, installation of the carrier pipe began. “The entire line (twin force mains) was installed from the Southeast shaft, located on the Sayreville side of the river. The pipe was installed on two shifts with our best day having installed 20 pipes,” stated Rautenberg. Kenny Construction utilized a Caterpillar Telehandler with a custom fabricated handling device to bring the pipe into the tunnel.

“As the pipe was installed, each joint was air pressure tested per the project specifications to 75 psi, for two minutes using a full circle pipe joint tester to ensure leak-free performance. Upon completion of the shaft piping, each of the lines was subjected to a hydrostatic test of 75 psi. The pipeline passed all tests without a single leak,” explained Rautenberg.

One of the original problems with the existing line was the limited access. For this newly designed and redundant system, the Authority established man access points to permit internal inspection of the pipeline. Epoxy coated steel T-base manway entry fittings with alloy hardware were installed at three points along each pipeline.

Full inspection of the pipeline can be conducted within 500 feet of every tee location, which was a criteria established by local fire rescue teams. The 60-by-42-inch diameter tees were manufactured by Smith Blair of Texarkana, Ark. CCFRPM was continuous through the T-base, with a 42-inch diameter hole cut for the access manway.

The next phase of construction included grouting the dual lines in place. A blocking scheme was designed and installed to anchor the pipe and resist the uplift. “With the blocking in place, the backfill plan called for the first lift of material to be a lightweight cellular grout with a density of 35 pcf. The cellular grout encased the pipe to eight inches below the spring line. Once the cellular grout was in place, both of the pipes were filled with water for ballast, and then encased to a point approximately four inches below the outside crown of the pipe with 4,000 psi structural concrete,” explained Rautenberg. This design allowed for a six-foot high open walkway along the center of the tunnel for future access.

The CCFRPM pipe in the tunnel was connected to 60-inch diameter ductile iron pipe risers at the Northwest and Southeast shafts. These risers connect to the surface piping and are under a separate contract in Phase Three.

Access to the pipe for future repairs would prove quite difficult at depths of 70 to 90 feet. Centrifugally cast fiberglass pipe’s successful history of tunneling projects, ability to withstand the corrosive environment and leak-free joints made the pipe ideal for this force main project. 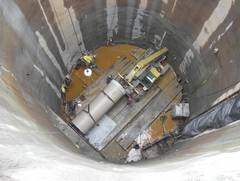 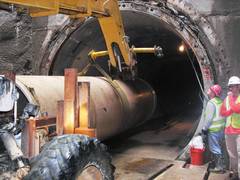 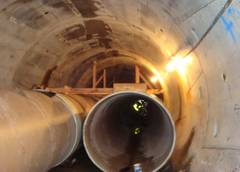 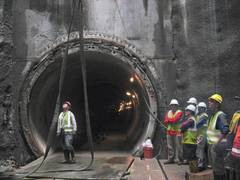