The City of Marysville, Ohio maintains and operates a wastewater system that serves a population of 19,000. Included in their service area are several industrial contributors including Scotts Miracle-Gro Company, Nestle Corporation, Goodyear Tire and Rubber Co. and Honda of America Manufacturing.

To meet the future wastewater requirements while serving it current population, the City recognized the need for a new Water Reclamation Facility. In addition, a new wastewater conveyance system was planned in order to eliminate lift stations throughout the existing collection system and reduce the number of future pump stations. This would reduce Marysville’s maintenance cost and increase future reliability of their conveyance system.

The consulting engineering firm of DLZ of Columbus, Ohio, designed the Truck Interceptor Project. Debarati Bardhan, public works project manager with DLZ stated, “The design considerations for the project were based on the Marysville Wastewater Master Plan and included assumptions based on the existing residential and commercial / industrial demographics and predicted future growth. We had a good distribution of residential and commercial contributors within the various sheds.”

The Economies of Trenchless
The presence of industrial sites also posed design challenges. Within the project alignment, there was potential for contaminated soils and water. “This was one of the reasons we chose to specify trenchless installation techniques for the majority of the project,” Bardhan explained. “Other reasons included depth, issues related to easement acquisition and subsurface utility interferences. Even in areas where we were in a wide open field, the depth dictated that the most economic method of construction would be trenchless.”

By choosing trenchless installation and placing the shaft locations outside the possible contamination zones, the difficulties associated with managing the contamination, if it was encountered, were significantly reduced.

The 14,000 feet of jacking pipe was installed in 18 drives with the longest drive extending 1,056 feet. Super Excavators averaged less than 100-tons of jacking load during installation of the 60-inch, 540-ton jacking pipe.

For the longer jacking runs, intermediate jacking stations were installed to complement the main jacks at the installation pit. These intermediate jacking stations were used to distribute the thrusting force along the pipe string by dividing the string into independent reaches. The jacks were installed inside a steel casing fabricated with the same outside diameter as the pipe.

A Microtunneling Boring Machine (MTBM) was the equipment utilized on the tunnel portion of the Trunk Interceptor project. It operates as a remote controlled, earth pressure balance machine. This project consisted of varying and difficult ground conditions such as cobbles, boulders, gravels and sticky clays. The MTBM performed well and was equipped with disk cutters to handle the large quantity of rocks.

“Initially there were originally no intermediate jack stations used and we did not plan on using any,” said Jake Keegan, Project Manager with Super Excavators. “On the second tunnel run we had to excavate a recovery shaft because the machine was stuck, due to ground conditions. Therefore, intermediate jack stations had to be installed on three of the longer runs over 800 feet. However, they proved unnecessary; we did not need to extend the jacks on any of the runs, as no surge in jacking pressure occurred.”

Hobas Saves On Installation
There were two pipe materials specified for this project: centrifugally cast, fiberglass reinforced, polymer mortar (CCFRPM) and reinforced concrete pipe with internal PVC lining. CCFRPM was utilized for the majority of this project instead of RCP due to the cost savings. The utilization of CCFRPM fittings for some of the manholes also contributed to cost savings.

“The initial material cost increase of the CCFRPM over the concrete was offset by the decreased labor cost we expected to see with the Hobas fittings,” stated Keegan. This was due in part to the easy connections with the supplied couplings, which reduced the amount of labor needed to install the manholes.

Once the line was installed, a series of tests was conducted to ensure proper installation and performance of the installed line. The completed line was also checked for ovality and leakage per the project specifications.

“A proof stick with a length equal to 97 percent of the internal diameter of the installed pipe was utilized by the Construction Management Team to check for deflection. DLZ Inspectors walked through the installed Hobas pipe with the stick to ensure that minimum acceptable internal diameter and shape were maintained throughout the length of the project and deflection was within the limits allowed in the Contract Documents and the pipe manufacturer specifications,” explained Bardhan.

In addition, the installed pipe was tested for pipe joint leakage. “All tests were conducted in accordance with the latest specifications and results were found to be acceptable and within the limits specified in the Contract Documents,” stated Bardhan. “Actually, in the jacking installation we didn’t find a single joint leak,” Keegan said. “When the job was completed, all parties were pleased with the project success.” 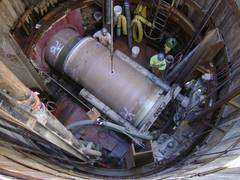 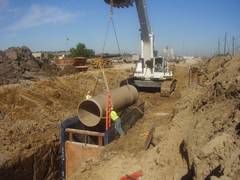 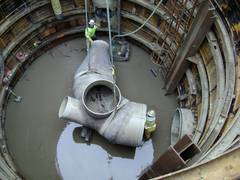