Conroe is a growing suburban city, 40 miles north of the Hobas plant in Houston, Texas, with a population approaching 60,000 residents. Like most municipalities, the City of Conroe has maintenance tasks within its sewer and wastewater system that need to be addressed. One such project, the Interstate 45 Sanitary Sewer Rehabilitation, was recently completed.

As a budget-conscious city, Conroe designs and manages most of its own infrastructure improvement projects. Officials believe this method increases its control while saving the City consulting expenses. The funds are then diverted directly toward ongoing maintenance projects as well as increasing the capacity within its water and sewer systems. The Interstate 45 Sanitary Sewer Rehabilitation project rehabilitated the existing 54-inch trunk line. The solution consisted of sliplining with 535 feet of 48-inch diameter Hobas Centrifugally Cast Fiberglass Reinforced Polymer Mortar (CCFRPM) pipe. As the main trunk line flowing into the only wastewater treatment plant for Conroe, this line is critical.

The project specifications allowed several different methods and products to rehabilitate the line, including a cured-in-place (CIPP) option and a segmental sliplining option. Trenchless methods were preferred for this project due to the cover depth, which ranged from 20 to 22 feet, and the amount of surface traffic. The existing line ran underneath a heavily traveled interstate and popular rail line. Although both CIPP and Hobas pipes were specified, Lewis Contractors of Bertram, Texas, was the low bidder on the project and chose to rehabilitate the pipe by sliplining with Hobas.

Assessing Infrastructure
The existing 54-inch reinforced concrete pipe was installed in the late 1970s. Experience with other concrete pipes of this age in the city led the public works employees to suspect the condition of this main trunk line. They inspected the line to determine the condition.

“They ran TVs through the line using ultrasonic technology,” explained Erwin Burden, assistant public works director, City of Conroe. Evaluation of the existing line by this technology can be used to verify defects in the existing line and provide information useful in determining the extent of its corrosion.

The survey revealed the existing pipe was showing signs of deterioration. The steel reinforcement was visible in the crown of some of the existing concrete pipes. The microorganisms that are naturally present in wastewater systems can convert hydrogen sulfide gas to sulfuric acid, which makes the pipes vulnerable to corrosion. “In addition to the decay, there was joint separation under the railroad crossing,” added Burden. Acting proactively, the City opted to rehabilitate the line.

Quick and Easy Installation
The entire project took approximately three weeks to complete with the majority of the time spent preparing the job site for the installation and post-installation cleanup. Hobas Pipe USA supplied 20-foot sections of 48-inch diameter 36-psi stiffness pipe. The pipe designed for this installation utilized a low profile bell and spigot joint. This joint facilitates an easy, quick installation and requires less joining force. The entire 535 feet of pipe was installed in 14 hours.

The installation pit was located on the east side of Interstate 45 and the pipe string was pushed west under the main lanes and feeder road of the interstate highway just south of Conroe’s Loop 336. I-45 is the main interstate highway and a major traffic corridor that travels in a north-south direction across the eastern portion of Texas. Conroe is located on I-45 along the main traffic route between Houston and Dallas.

In addition to traveling under roadways, the existing trunk sewer travels within the Union Pacific Railway easement and, in one location, directly under the railroad crossing. “The pipe was sliplined through an existing line that was in place and there was no disturbance to the railroad right-of-way,” explained Matt Lewis, project manager with Lewis Contractors. The installation pit and work efforts were located adjacent to the rail line but did not affect the operation of the line. Trains passed through daily, even during the installation of the slipline pipe; there was no interruption to rail service.

The City obtained a permit from the Texas Department of Transportation (TxDOT) to slipline the pipe under Interstate 45. In addition to the sliplining directly under the TxDOT road, “We were abandoning manholes along the frontage road so that we could move them out of the pavement, allowing us future access without having to shut down a lane and interrupt traffic,” explained Burden. The high-strength fiberglass composite used for sliplining pipes is designed to withstand the E-80 and HS-20 live loads.

Bypass pumping was necessary during the installation due to the necessary manhole rehabilitation and relocation. “The flow was too great so we had to by-pass pump, but still had a live flow within the line. It was just decreased, running about half,” stated Lewis. The pipe was installed from the upstream location downstream, with the flow.

“The new manholes that were installed were also manufactured of fiberglass material and were located at the launch pit and one receiving pit locations. An additional manhole was installed on an existing 18-inch line, which redirected flow into one of the new manholes. There were two existing manholes that were plugged and filled with flowable fill and abandoned,” explained Lewis.

The completion of this project will ensure that the line remains operational for the City of Conroe. “The City has been proactive in upgrading our sewer system to corrosion-resistant materials,” concluded Burden. 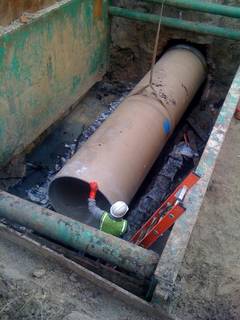 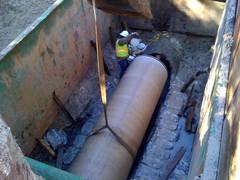