Sinkhole Repaired in Michigan Township
Clinton Township, like most communities, can provide us with case studies in evolving infrastructure needs.

On July 22, 1782, more than a year before the American Revolutionary War ended, the first settlement was founded on the site of present-day Clinton Township, Mich., near the Clinton River. The lower bluff, which is close to the river, plus springs and brooks provided an abundant supply of fresh water and sandy soils, which made the area suitable for farming and development. Today, in this same area just 20 miles northeast of Detroit, many others have found Clinton Township desirable; it now has the biggest population of the 1,242 townships in Michigan.

The area’s abundance of water and sandy soil, which was coveted in the late 1700s, is now at the source of a public works emergency.

“This is a case where corrugated metal storm drains that were installed in the mid-1940s rotted away, blocking the flow of storm water and causing severe underground soil erosion,” said Macomb County public works commissioner, Anthony Marrocco.

This underground erosion caused by deteriorated pipe and wet sandy soils eventually created a 20-foot by 10-foot sinkhole and the collapsing of the Cottrell Creek Drain. The 65-year old drain accepts over 300 acres of drainage from Clinton Township and surrounding areas.

Clinton Township, located in Macomb County, has lots of older infrastructure to maintain. Tom Stockel, construction engineer with Macomb County Drain Commission, said, “A lot of our work is infrastructure; we are trying to do what we can do with the resources we have. We have been able to get federal money for some projects.”

With so many lines to maintain, and funding as thin as ever, the ongoing maintenance of the many drains is enormous. “We have 800 or so drains in the county to maintain, some open and some closed,” Stockel added. “This was one of those cases classified as an emergency repair.” The commission chose to slipline the collapsed line with Hobas pipe to prevent further damage.

Emergency Repairs
General contractor, Tyger Excavating, Inc. of New Haven, Mich., which provides services including sewer, drainage, water, utilities, excavation and commercial subdivisions, was contacted and hired to perform the remediation work and repairs to the aging infrastructure. They started work on the line in September 2009, repairing the deteriorated pipe by sliplining with Hobas centrifugally cast, fiberglass-reinforced, polymer mortar pipe (CCFRPM) pipes. The 20-foot-long sections of 54-inch diameter, 65-psi stiffness class pipe were inserted into an existing 60-inch corrugated metal pipe (CMP). The new pipes were manufactured with a flush bell spigot to ease installation into the deteriorated line.

Tyger installed the liner pipe in two runs of 250 linear feet each and utilized open cut installation methods for the 10-foot deep area where the 20-foot by 10-foot sinkhole originally appeared.

“The storm pipe was running between two houses and drains into Lake Sinclair,” Stockel elaborated. “The old CMP pipe installed years ago had rotted over time; we didn’t know there was a problem until we had a sinkhole in the ground. We looked at the best economical way to make the repair, and we didn’t want an open cut option due to the location.

“We had used the pipe previously on a job and I like the product,” Stockel added. “I have seen it in use on a few applications. It is very smooth; it is a good pipe. I’d like to see CCFRPM used more often. In this instance, the contractor suggested its use at no additional cost to the County and we accepted his proposal.”

Jeff Peyerk of Tyger Excavating stated, “We had never used CCFRPM before. After we learned about it, we thought it was a more durable option for this installation than the proposed profile wall PVC product. The installation is now complete, and we are pleased with the performance.”

The Cottrell Creek Drain had segments that were too damaged to reline, and in these areas, the pipe was direct buried. The project had its challenges in areas where the pipe had to be jacked into place – being pushed through the existing pipe that was filled with soil. Once the CCFRPM was in place, the material was excavated from within the pipe.

“CCFRPM pipes are extremely strong,” said Dave Furnari, foreman for Tyger Excavating, who was onsite during the installation. He said the big advantage of this kind of pipe is the ability to push it directly into the existing pipe. After insertion, the annular space between the liner pipe and the deteriorated CMP was grouted.

“The grout used to fill the annular space gives off heat as it cures, and can cause problems for some pipes that are not as heat resistant. CCFRPM, being a thermosetting material, is not as affected by elevated temperatures as many thermoplastics which lose properties more rapidly with elevated temperature. Our CCFRPM can maintain adequate strength and, therefore, resistance to collapse during grouting,” stated Randy Whiddon, field service manager with Hobas.

Not only are the pipes user-friendly to install but also, they are a long-term solution. “These pipes will be here long after we’re gone,” commented Stockel. “They’re estimated to last more than 100 years.”

Neighbors were also pleased by the use of trenchless technology to solve the drainage problem. With the sliplining installation, the area was subjected to less disruption than if the entire line had been removed and replaced.

Completion
“We expected to have more challenges than we actually had,” observed Tyger’s Peyerk. “The combination of the strength of the CCFRPM pipe and the ability to push with our bore machine made for an easier job than we anticipated. We would definitely recommend this product for future projects. The delivery was quick and on time as promised.”

With the end of September 2009, the line is once again in operation and “everything is fine,” stated Stockel. “As they say, the line is out of sight and out of mind for many years to come.”

Erin Boudreaux, marketing assistant with Hobas Pipe USA in Houston stated, “Hobas has over a million feet of sliplining pipe installed across the nation. The use is growing as more owners, engineers and installers hear about the benefits of utilizing the pipe in this kind of installation.” 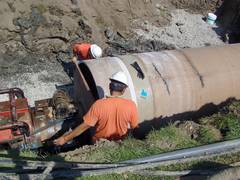 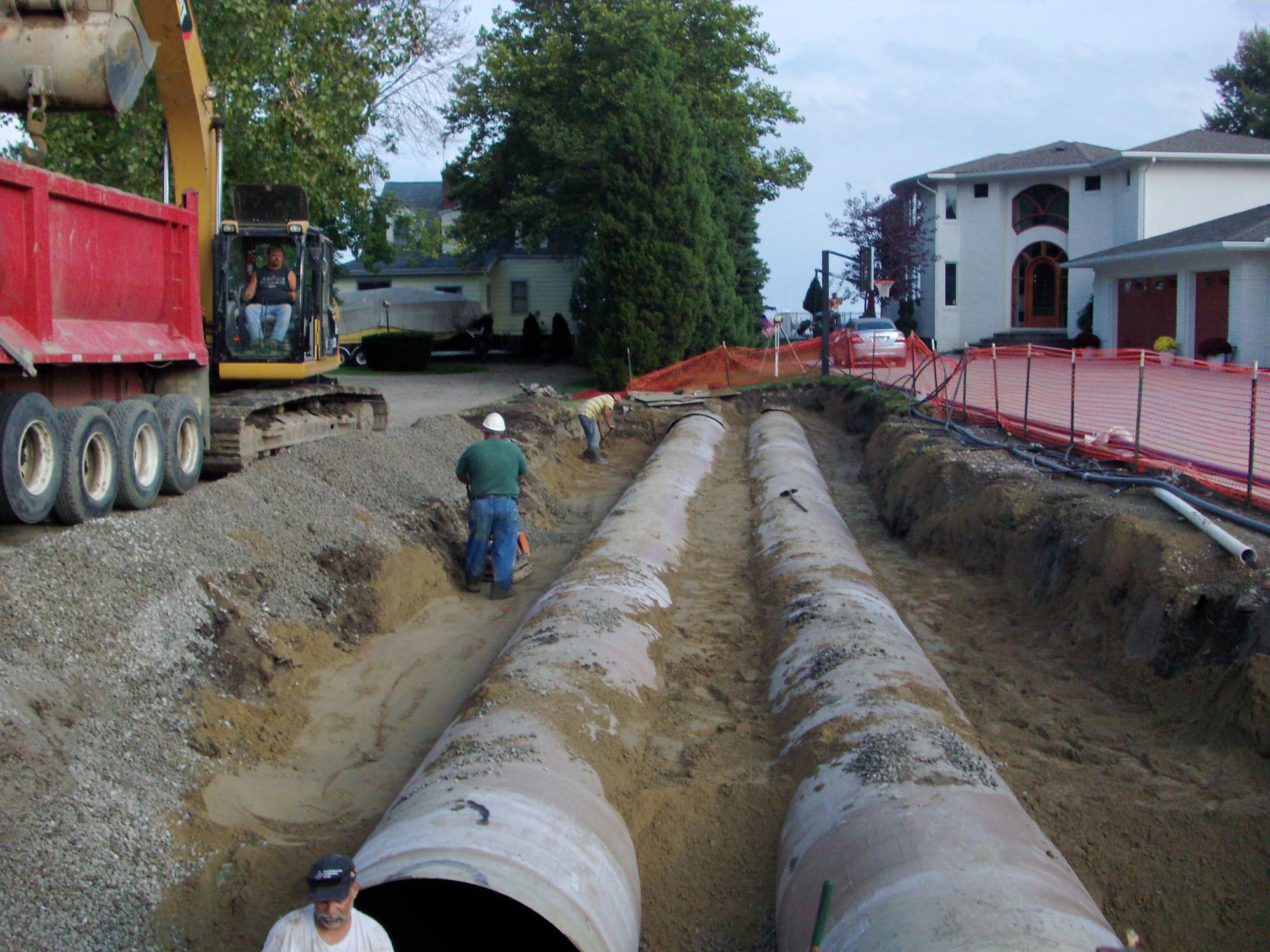 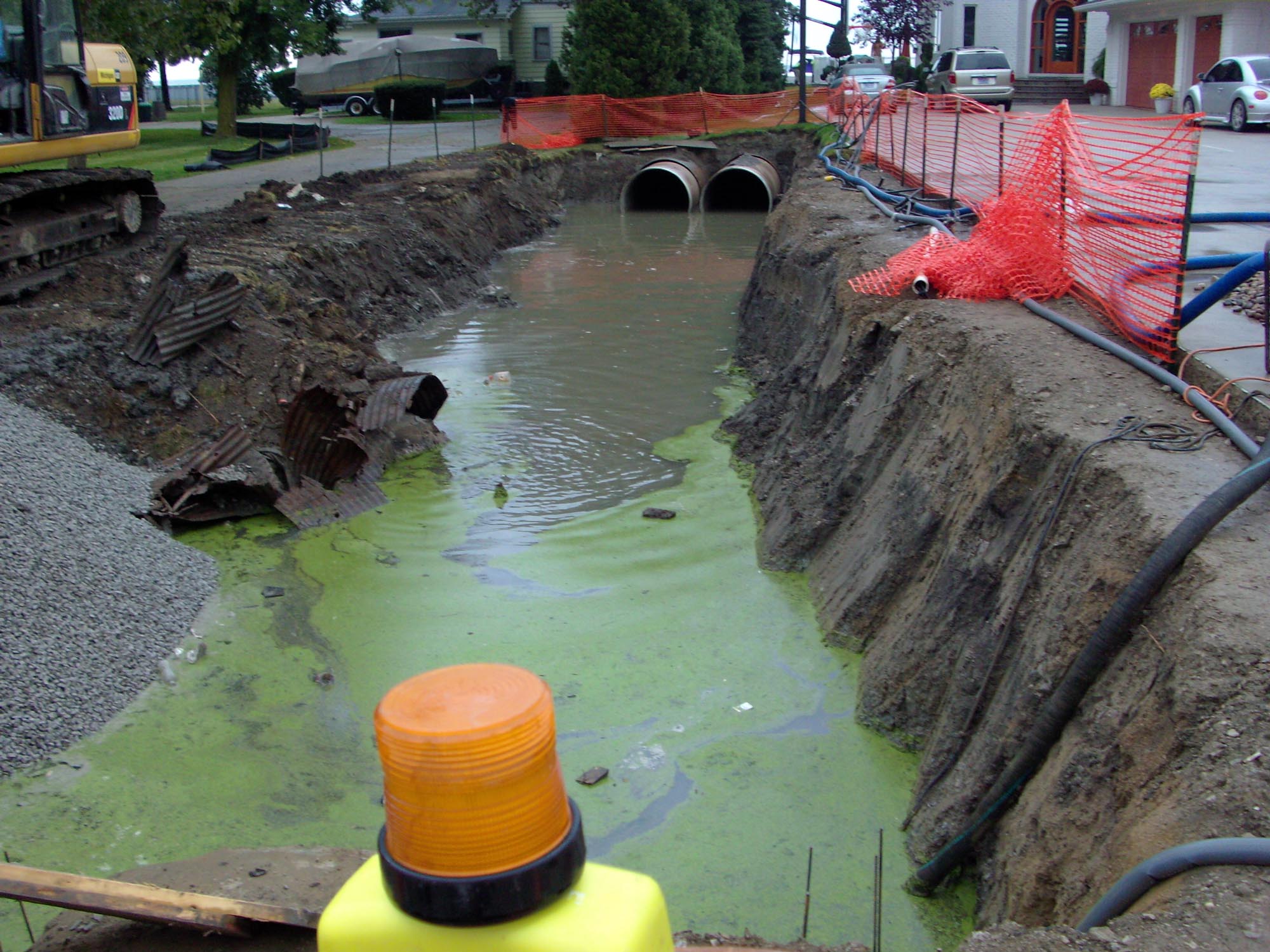 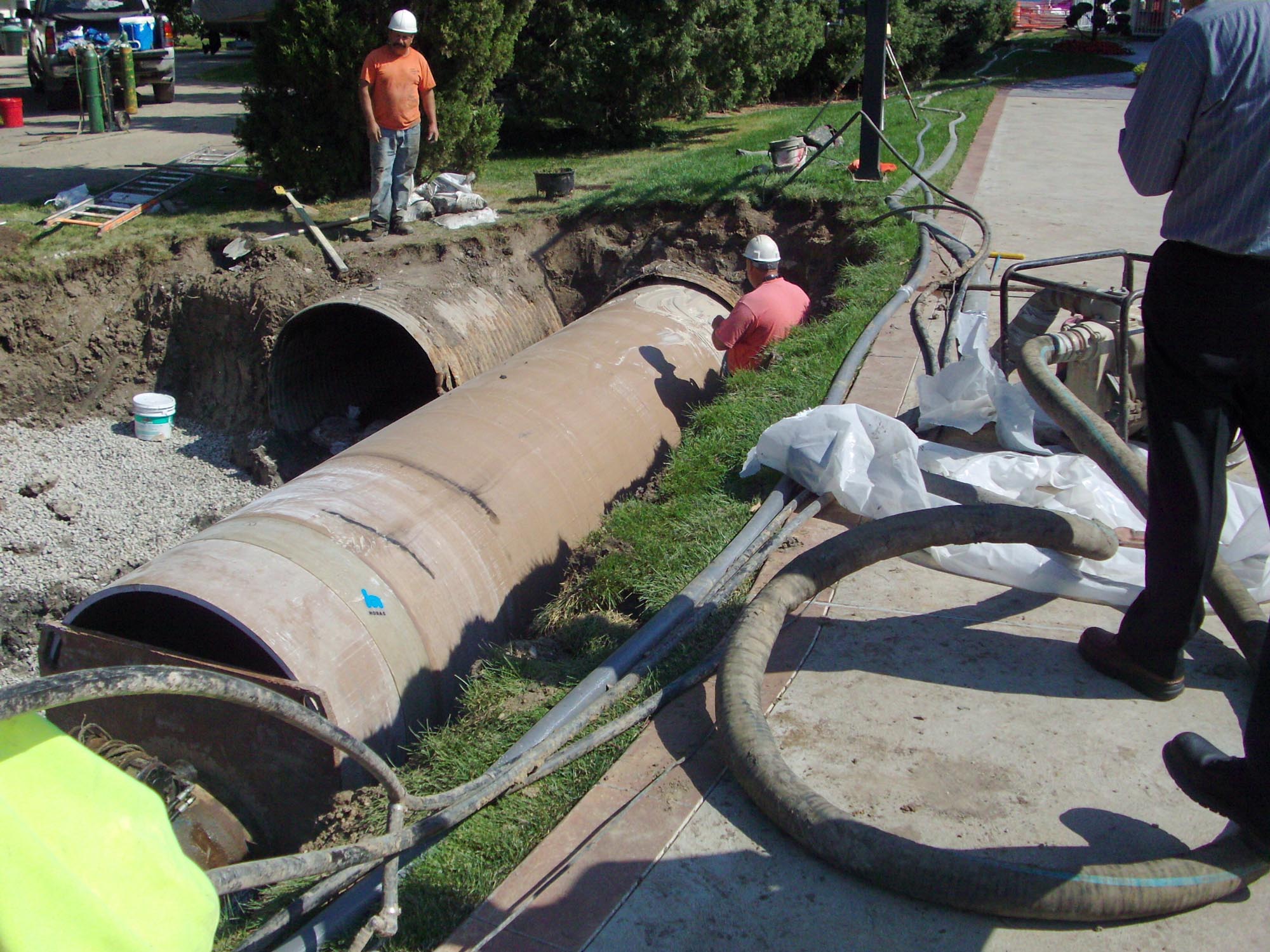