City of Carlsbad was Prepared, Are You? HOBAS Assists with Rapid Response

The City of Carlsbad recently had the opportunity to test their preparedness. Rapid response by their crews, the installation contractor and a pipe manufacturer achieved the best case scenario during a recent catastrophic event.
Collapsed Concrete Line
The primary influent line leading into the Encina Wastewater Treatment Plant Collapsed, creating a sinkhole and discharging raw sewage. The failure and resulting sinkhole occurred entirely within the Encina Wastewater Treatment Plant grounds. This treatment plant treats approximately 22 million gallons of sewage per day and serves the communities of Carlsbad, Encinitas, San Marcos and Vista in north San Diego County.

The Carlsbad Utilities Department responded quickly to contain and divert the discharge from public areas and install a temporary line to maintain service for residents and businesses in the service area. Even before dusk, repairs were being planned. City of Carlsbad engineers and the City of Vista engineering staff, with assistance from Brown and Caldwell civil engineers, began designing repairs to the collapsed 54-inch reinforced concrete pipe (RCP) installed in the early 1980s.

Corrosion Resistance Key
“The engineers wanted a large diameter pipe that is chemically resistant to H2S,” said Terry Smith, senior civil engineer for the City of Carlsbad Utilities Department. “We were confident that HOBAS met this criteria. Also, the O.D. of the 60-inch HOBAS pipe was nearly the same as the existing 54-inch RCP pipe, which would make it easier to connect to the existing structures. And lastly, HOBAS was able to meet our critical timeline for replacing the pipe.”

“We first used HOBAS pipe in Carlsbad about eight years ago when we installed about a mile of 42-inch HOBAS pipe by microtunneling,” said Smith. “We like the ability of the pipe to resist hydrogen sulfide-related corrosion and installation went smoothly during the microtunneling operation.

Capacity Increase a Plus
“The 60-inch diameter CCFRPM had a similar pipe OD to the existing 54-inch diameter concrete yet, increases the flow capacity substantially,” stated Kimberly Paggioli, Vice President of Marketing and Quality Control for HOBAS Pipe USA.

“The increased capacity of the 60-inch pipe was a bonus for us, knowing that the pipe will be large enough to carry the ultimate projected flows,” Smith added.

The HOBAS Houston manufacturing facility received the order on a Monday morning and was able to ship the pipe that same day. “Although we don’t make pipe to stock, we do carry a large inventory of product to be delivered in the next several weeks. In this case, we could borrow the product from an ongoing job, and remake the pipe for the other ongoing project and deliver both on time,” stated Paggioli. “This is one of the benefits of our large, versatile manufacturing facility here in Houston. Even though we are located across the country, we can expedite deliveries in the case of an emergency.”

For this delivery, we acquired team drivers to minimize the transit time between Houston and the West Coast,” commented Rob Epstein, Asst. Commercial Manager for HOBAS Pipe USA. The pipe arrived via truck at the treatment plant in Carlsbad two days later.

Teamwork Completes Repair Fast
The next morning, J.R. Filanc Construction Co. of Escondido, California commenced repairs. The entire 320-foot reach was installed by open trench construction with the HOBAS pipe connecting to the influent structure on the treatment plant site.

The repair was completed 12 days after the failure had occurred thanks to the teamwork of the Carlsbad Utilities Department, Brown and Caldwell design engineers, the J.R. Filanc Construction crew, and the rapid pipe delivery by HOBAS Pipe USA. 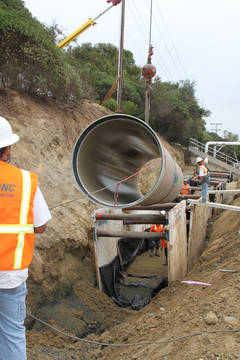 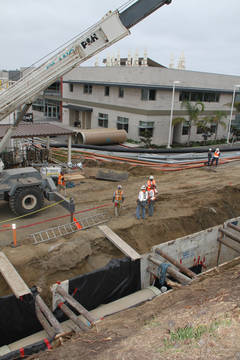