Headlines have been describing many types of industrial accidents during the past months. Many companies are taking measures to prevent these negative environmental impacts. One is the electric utility that serves more than three million customers across the Southeast United States. They chose products made by Hobas Pipe USA of Houston, Texas, for a solution at two of their 500-kilovolt (kV) substations.
Electrical Distribution
When power leaves any generating plant, it travels to massive substations that begin the distribution process. Electricity arrives at 500,000 volts and must be stepped down to a lower voltage for its secondary distribution to successive substations in the power grid, where it eventually splits off to various residential neighborhoods and commercial zones.

All these substations are constructed with drainage systems that collect rainwater to be channeled away from the electrical transformer and discharged into a nearby creek or tributary to a river. Because these initial distribution transformers deal with massive amounts of voltage, they are encased in several thousand gallons of oil for cooling.

Preventing Oil Spills
In order to devise the most efficient containment system possible to protect against a transformer leak, the utility provided research funds to several engineering firms to design an interceptor and underground oil containment system for two existing 500-kV substations. These computer-controlled substations are unmanned, and therefore the challenge of designing the system lay in its automation to sense an oil spill on its own. The electric utility also wanted a pipe material that would be impervious to most of the chemicals with which it would come in contact, particularly oil, and they wanted a joining system that would not leak.

They chose a unique design submitted by civil engineers at Davis-Martin-Powell & Associates (DMP) of High Point, NC. Ben Palmer, P.E., the DMP engineer in charge of the project, worked with Don Joyce of Pomona Pipe Products, who suggested using Hobas Pipe for the project.

“I know of no other product that has a better joint or better chemical resistance than Hobas pipe,” said Joyce. “Palmer agreed because he had also had some experience with it [Hobas pipe].”

Palmer’s plan to intercept the drainage system involved installing an oil stop valve that would be sensitive to the specific gravity of the liquid in it. Water inside this chamber would cause the valve to float, allowing the water to continue outward to public drainage. If oil were sensed inside this chamber, the valve would not open because oil is less dense and lacks the buoyancy to lift the valve.

“The bank of transformers is situated atop a rock field sump,” Palmer explained. “The sump areas are connected to a storm drain pipe that conveys the storm water runoff off-site and drains these sumps during a rainfall event.”

In the event that the valve sensed oil and remained closed, the oil-contaminated water would be funneled into an underground containment reservoir constructed of six-foot diameter Hobas pipe, where it would temporarily remain until it could be pumped out manually and disposed of properly.

“The design capacities for the two sites were based upon containment of a single piece of equipment and the rainfall from a 25-year, 24-hour storm event,” according to Palmer. “The concept was very similar to an underground stormwater detention facility, just a different application.”

The containment vessels are made up of custom-made Hobas elbows and tees to create manifolds and 90- to 104-foot long straight runs, according to Matt Swenson of Power Consulting, LLC, the on-site inspector for the utility. The straight sections used were 20 feet long and weighed about 7,000 pounds.

“The owner had pre-ordered the Hobas pipe for the project due to some of the custom manufacturing involved,” said Joyce. “It saved time and the pipe was on site when the contractors arrived.”

The installation was performed by different contractors at the two different sites, neither of whom had prior experience with Hobas pipe. Quartermaster Environmental installed one system and Willis Construction Co. installed the other.

Each 72-inch Hobas pipe containment reservoir was installed in a 12-foot deep excavation atop a one-foot base of washed stone and topped with five to six feet of cover.

There was a learning curve in handling and placing the sections, with correct placement being critical in order to make the straight runs and enable the manifolds to join properly at opposite ends, approximately 100 feet apart, Swenson explained. “As the contractor set each piece, they backfilled a portion to hold the pipe in place so that there would be no need for manipulation when tying into the manifold at the end of the run.”

“With just a few instructions on how to handle Hobas pipe, the installation went well,” Joyce added.

Swenson, who was also pleased with the installation said, “I feel both projects were a success and I understand that both are operating correctly years later, namely that they are dry.” 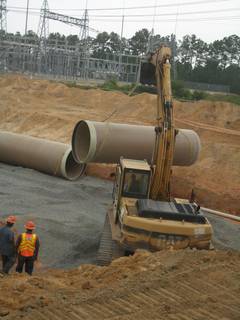 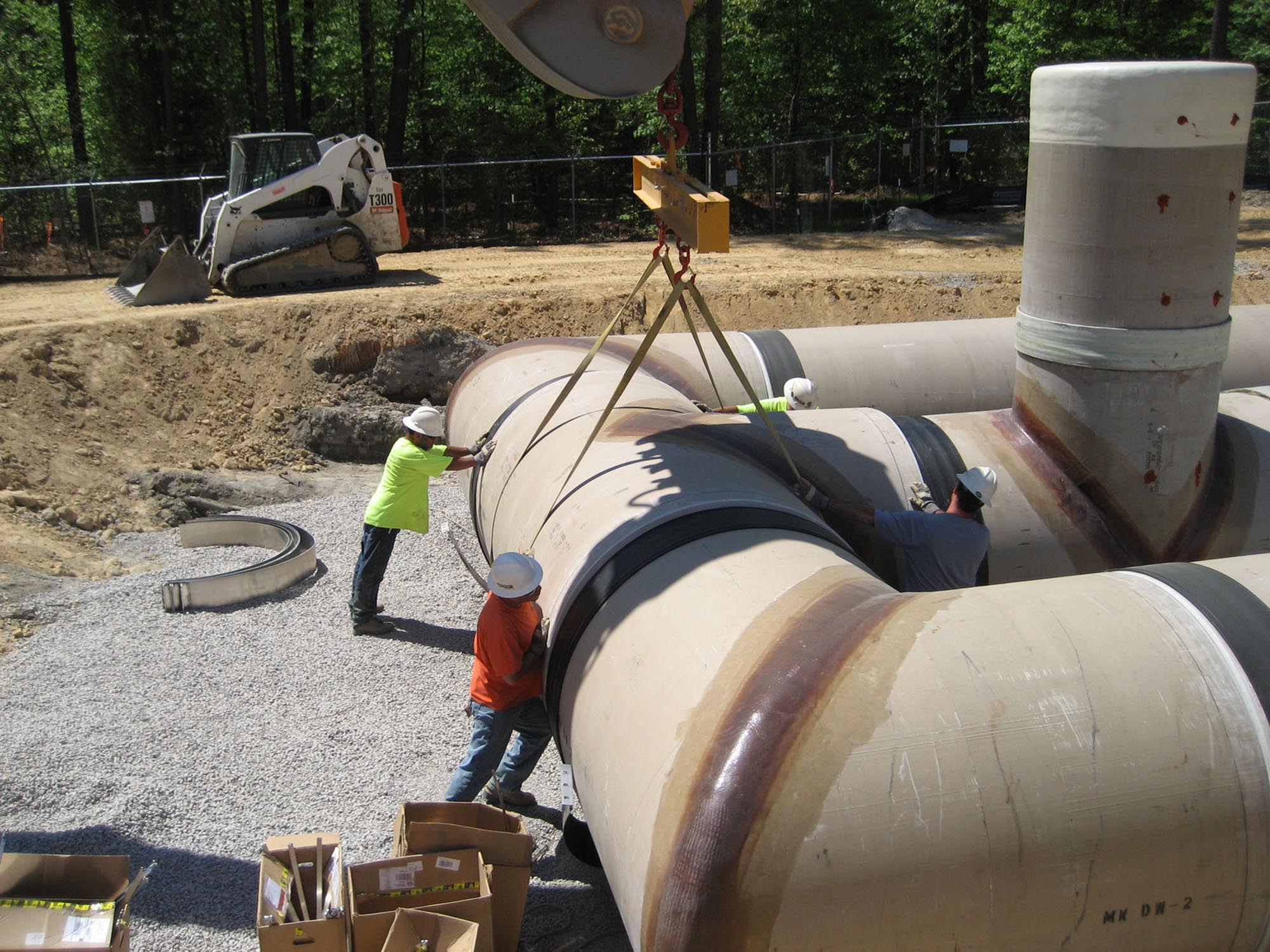 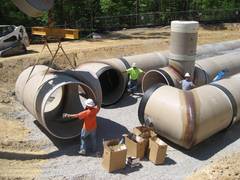 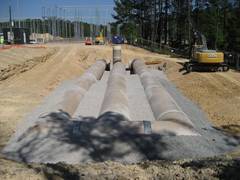 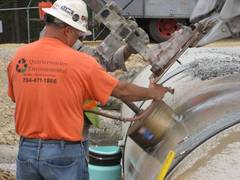