Augusta, Ga., is about 150 miles east of Atlanta. Established in 1736, ” The Garden City of the South,” has many local historic attractions that attract visitors from afar and is a hub for military, manufacturing, and medicine and home of several noted educational institutions. Augusta was named by Relocate-America™ as one of the “Top 100 Places to Live” in 2009. But none of that kept its aging sewer system from deteriorating.

Federal dollars allocated through the Georgia State Revolving Fund have been awarded to the City of Augusta to complete reconstruction of a portion of their sewer system with Hobas pipe. The project’s old concrete pipe was installed in the early 1960s. The city engaged Stevenson & Palmer Engineering, Inc.’s Augusta office to perform a condition assessment of the troubled line. Engineers found that hydrogen sulfide (H2S) and sulfuric acid (H2SO4) had attacked the crown of the pipe, weakening the structure.

This is a typical occurrence in concrete pipe where you have considerable hydrogen sulfide formation. Numerous conditions lead to this. The time that sewage remains in the line from the source to the treatment plant and biological reactions that occur through oxygen depletion are primary contributors. Thiobacillus bacteria metabolize the hydrogen sulfides, which produce sulfuric acid as a byproduct. The sulfuric acid reacts with moisture along the exposed pipe sidewalls and attacks the concrete pipe surfaces. Repeated sulfuric acid attack can deteriorate the concrete pipe leading to exposed rebar and structural concerns.

Stevenson & Palmer was subsequently engaged to design the new gravity sewer for the line with this chemistry in mind. The recommendation was made to replace almost six miles of the city’s sewer system and abandon in-place the existing concrete sewer. The city did not have the funds to replace this entire length at one time, so the project was divided into two phases.

Choosing the Pipe
A number of factors led to Stevenson & Palmer specifying Hobas centrifugally cast fiberglass reinforced polymer mortar (CCFRPM) pipe for the replacement line. CCFRPM Pipe is highly resistant to the H2S and H2SO4 combination that caused the corrosive damage to the concrete pipe. The pipe’s lighter weight compared to concrete and ductile iron makes transportation and installation easier and more economical than fully lined concrete. While high-density polyethylene (HDPE) pipe and filament-wound fiberglass reinforced pipe are also corrosion resistant relative to concrete and are comparatively lightweight, the CCFRPM pipe’s other benefits weighed into the selection.

Although the CCFRPM pipe was expected to be bid at a higher material cost per linear foot, the additional installation costs associated with HDPE pipe: the additional man-hours of field welding, backfilling operations, and lack of contractor experience installing HDPE pipe, make the installed cost more expensive. Stevenson & Palmer engineers were comfortable using the Hobas product as the base bid and recommending CCFRPM pipe to the City of Augusta. The company’s proven track record was an important aspect in this decision.

Phase I
The City of Augusta bid Phase I, with Oscar Renda Contracting (ORC) of Roanoke, Texas, winning this $16 million contract to replace over 13,000 linear feet, or about 2.5 miles of the line. Work began in the mid-city, then southward through a light commercial zone. The contractor installed over 6,000 linear feet of 63-inch diameter and 7,200 linear feet of 72-inch diameter pipe prior to decommissioning the existing 54-inch concrete pipe.

The ORC crew laid the new line parallel to the old line, at a distance of approximately 10 to 15 feet. The old line was replaced only at connection points: two main line junction boxes and three 36-inch tributaries, according to ORC project manager Dennis Bailey. About 6,300 feet (almost 1.2 miles) of the 63-inch diameter pipe was installed directly under New Savannah Rd.

“We went right down the center of the street with it,” stated Bailey. “We had to keep access to all the businesses and residences, so we closed portions of the street and then backfilled with a temporary surface.” The faster installation of CCFRPM pipe as compared to other materials shortened the inconvenience for local traffic by several weeks.

Southland Contracting, Fort Worth, Texas, was subcontracted to perform the directional bores: a 280-foot bore took the 72-inch diameter line under Gordon Highway (US 1); a 72-inch casing was bored 160 feet for 63-inch diameter pipe under the Norfolk Southern railroad tracks, and a 116-foot bore for 48-inch diameter pipe ran under Doug Barnard Parkway, (GA SR Spur 56).

Phase 2
Phase 2, the completion of the replacement project, will be constructed by John D. Stephens of Lawrenceville Ga. The city’s funds were focused on upgrading the Messerly Wastewater Pollution Control Facility, where the main interceptor sanitary sewer discharges for final treatment.

Stevenson & Palmer Engineering assisted Augusta complete an application to receive funding under the American Recovery and Reinvestment Act (ARRA) economic stimulus for Phase 2 as a State Revolving Fund (SRF) project. Due to the competitive nature of the ARRA program, the city wasn’t selected for ARRA stimulus funds, but did qualify for a long-term, low-interest loan from Georgia Environmental Facilities Authority, backed by federal funds.

Phase 2, which begins where Phase 1 ended, at the intersection of Doug Barnard Parkway and Dan Bowles Road, will continue southeastward, terminating at the headworks of the Messerly Wastewater Pollution Control Plant near Augusta Regional Airport at Bush Field. It will involve the installation of approximately 9,000 linear feet of 84-inch diameter and about 5,200 linear feet of 72-inch diameter pipe. Two bores will be required. One will be a 210-foot direct jack and tunnel of 72-inch diameter pipe under Rocky Creek. The other will be a 335-foot direct bore that will take 84-inch diameter pipe under Federal Highway I-520, the Bobby Jones Expressway.

By specifying CCFRPM as the base bid, the ARRA/SRF Stimulus “Buy American” requirement was met, since Hobas manufactures CCFRPM pipe at their facility in Houston, Texas. The HDPE pipe specified as an alternate bid to ensure competitive pipe material pricing is manufactured in Canada. The city would have had to apply for an exception to the “Buy American” clause if the HDPE material bid at a relatively lower installed cost and was ultimately chosen.

John D. Stephens’ crews have been staying busy since they started. Installation rates are high, even on the larger diameters. Their best day has been 18 joints, or 360 feet of 84-inch diameter,” said Joe Schmits, area manager for Hobas.

The Stephens’ bid came in well below the engineer’s opinion. Probably the changes in the economy since Phase 1 was built led to the bids being considerably lower than was initially budgeted. Bid tab results showed all bidders included a significantly higher cost to use the alternate HDPE pipe material, confirming CCFRPM as the selected main interceptor pipe system. 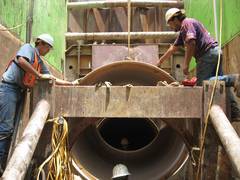 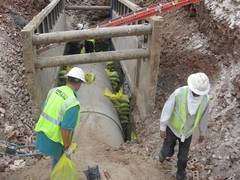 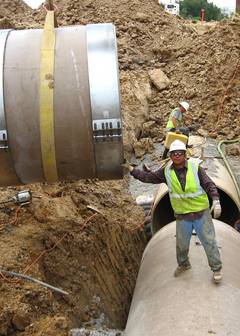 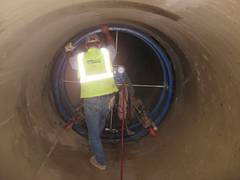