Airport Solutions
North Texas Contracting has placed the first HOBAS pipe at DFW International Airport in the Dallas/Fort Worth mid-cities. That first installation was a repair to an 84-inch corrugated steel culvert that had failed and created a sink hole approximately 30 feet deep and almost 20 feet in diameter after a series of heavy rains in 2007. North Texas Contracting of Keller, Texas won the public bid for the repair.

Because of the sinkhole’s proximity to major runways, the contractor was required to work around the clock to complete the job as quickly as possible, according to Zach Fusilier, vice president of North Texas Contracting. To protect their work area from the blast of planes’ jet engines, the contractor arranged a ‘wall’ of Conex storage containers anchored with cables to serve as a blast shield. The crew also had to coordinate closely with airport operations to ensure that their light towers were not angled to shine into the eyes of pilots landing on the runway, a situation that changed with the wind. Wind direction dictated whether planes approached the runway from the north or south.

The North Texas Contracting crew excavated to the old pipe, located the damaged section, and replaced it with a 20-foot section of HOBAS centrifugal cast, fiberglass reinforced, polymer mortar (CCFRPM) pipe. The joint was plugged into the steel corrugated line on one side and collared into the concrete junction box on the other side. Project superintendent, Josh Hodsdon, noted that the HOBAS pipe was easy to install because of its lighter length to weight ratio. Excavating the area to a 45-degree or smaller slope for safety proved to be the biggest challenge. Ultimately, the slope measured about 100 feet from the repair area. The work area was double-boxed for safety as the workers fabricated the repair.

Installation
The new system is being installed alongside the hangars. The outflow line then makes a turn toward the retention pond. The ponds add a second layer of safety in event of an oil leak, accidental fuel discharge, or AFFF fire suppression release, keeping any contaminants out of the Trinity River Authority wastewater system.

“We have to saw through the reinforced concrete apron, which ranges in thickness from 5 inches around the private hangars to 18 inches around the American Airlines hangars,” described Hodsdon. “Steel reinforcement is mostly #5 and #3 rebar with 1-1/4 inch dowels at the joints.” The contractor then excavates from 26 feet at pond to 6 feet deep at the farthest end to install the gravity fed lines.

“The east side of the airport has one hangar with an older oil/water separator already in place,” explained Josh Hodsdon. “We’ve tied into that separator and the existing line and laid new HOBAS 54-, 36-, and 18-inch piping to a water retention pond. If there is an emergency, they can divert the flow from the old separator to the lined open retention pond. At that point they can let it sit and evaporate, then come in and vacuum out any residue.”

The west side is more challenging, according to Hodsdon. A lined pond was created in the low point between the two hangar groups. From the pond, the contractor is laying 54-, 36-, and 18-inch HOBAS pipe to the American Airlines, American Eagle, and two private hangars. It is a closed water system with each hangar having its own tie-in to the line. Anything that drains into the floor drains on a daily basis will flow into the new lines and the oil/water separators. In the event of an emergency that would prompt a foam discharge, the system would automatically divert the flow into the lined retention pond and keep the liquid from going through the oil/water separator.

“One of the biggest challenges we have to face is the planes themselves,” Hodsdon explained. “American Airlines could not afford to have any downtime in their hangars. CT&S, Inc. of Irving, TX designed and fabricated a set of trench plates that would span our 6-foot wide trenches. The plates were engineered to support the 125-ton weight of a fully loaded 777, so the planes would always have access to the hangars. The plates are 1-1/4 inch thick steel. Welded underneath to add rigidity to the plates are nine W-beams about 10 inches tall.”

As the HOBAS pipe is positioned and joined, the trench is backfilled with crushed concrete and native backfill, and capped with an 18-inch thick 1,500 psi flowable fill grout mix. This extra reinforcement eliminates the potential for settlement below the apron pavement, which is then reconstructed with 5,500 psi paving mix.

The contractor is laying the line in sections, paying particular attention to the areas in front of the hangar doors to minimize the time that planes must use the trench plates. “We’ve developed this train process to keep everything moving,” said Hodsdon.

HOBAS Specified
That project proved so successful that HOBAS pipe was specified on a $9 million DFW Hangar Drainage Modifications project. In order to prevent water contaminated from airplane service and washings from directly entering the public wastewater system, North Texas Contracting was contracted to install a 13,000-foot system of pipe along with oil/water separators and two retention ponds in hangar areas. Of that amount, 7,600 feet is HOBAS CCFRPM pipe.

The system was designed jointly by the Dallas office of CH2M Hill and A.N.A. Consultants of Fort Worth. HOBAS sales representative Randy Nelson had introduced CCFRPM pipe to DFW Airport engineers, who expressed interest in using it for an appropriate project. Because HOBAS pipe is non-porous and due to the availability of special nitrile gaskets which are more resistant to jet fuel and chemicals of the sort used in airplane maintenance, this seemed to be the perfect application. Airport guidelines required that the system be water-tight, according to design engineer, Travis Attanasio, P.E. of A.N.A. Consultants. “Those requirements made HOBAS pipe the only choice,” he added.

“HOBAS pipes have been widely used in installations where dynamic loading is present such as the DFW installation,” explained Randy Whiddon, Field Service Manager and part of HOBAS Pipe USA’s engineering group. “The high stiffness CCFRPM pipe is a good choice for providing long-term structural strength whether it be for new construction or rehabilitation of an existing line.” 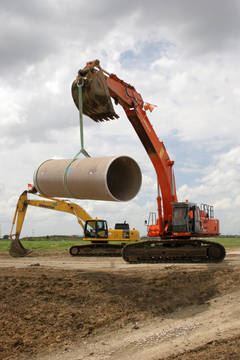 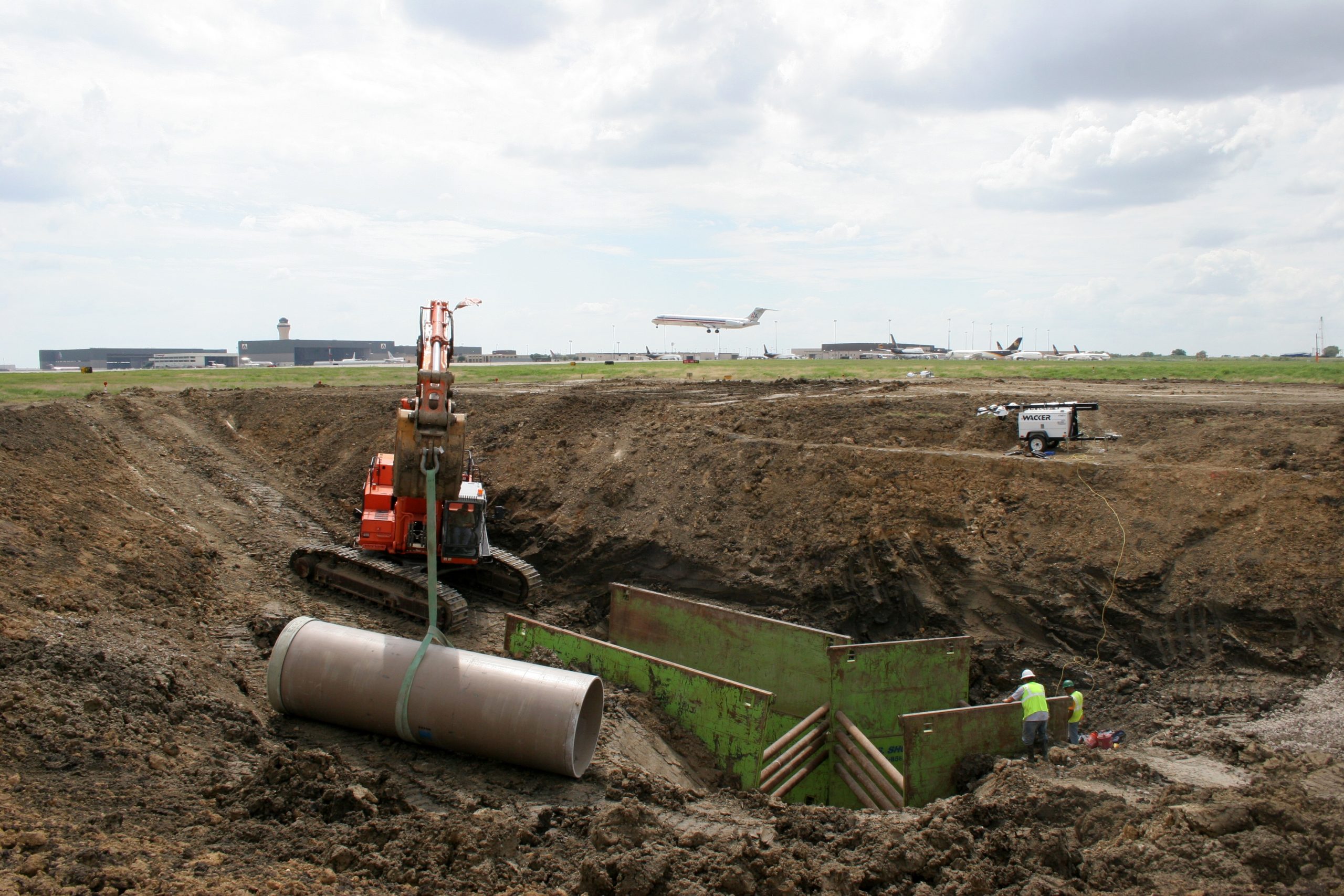 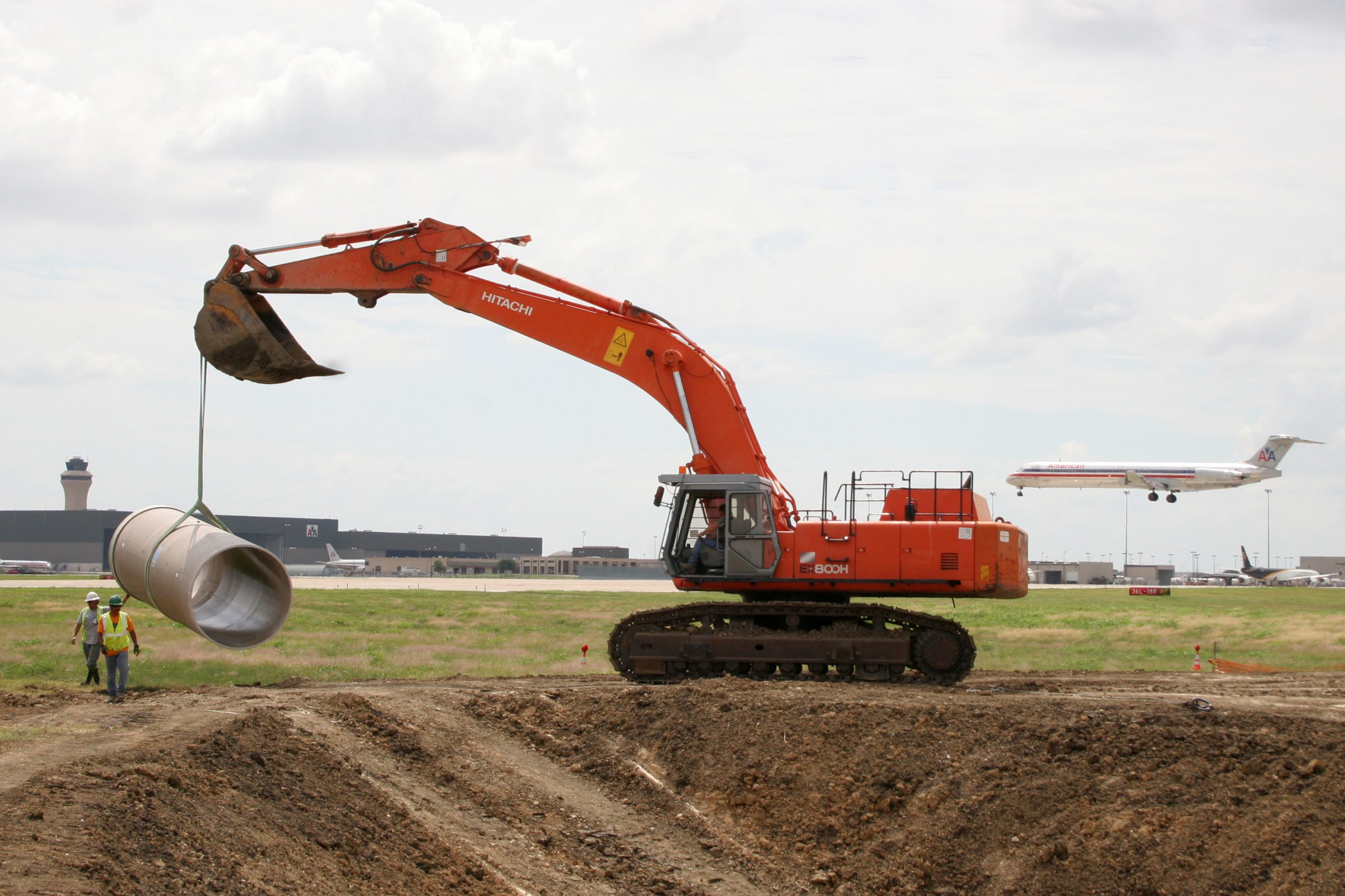 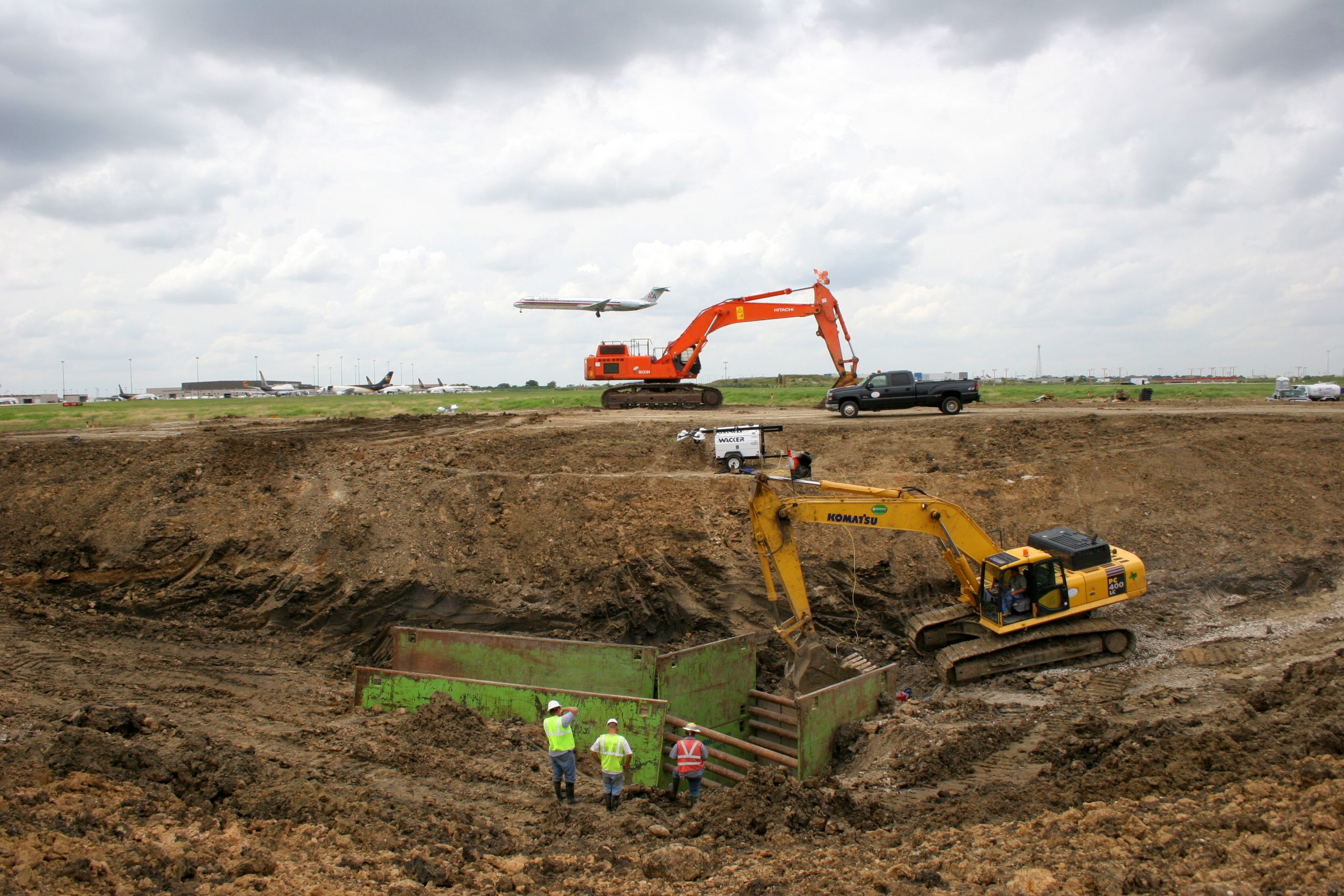