By using the Construction Manager At Risk (CMAR) delivery method, Pima County, Ariz., was able to slash four to six months from the time it takes to go from design to construction of a wastewater pipeline that is nearly five miles long and ranges up to 20 feet deep. Anytime you set out to build a large-diameter project like this, you are bound to face some challenges, but the design and construction team met those challenges and completed the big gravity-flow pipeline with no major problems.

Pima County’s Wastewater Reclamation System serves the greater Tucson area, which has a population of more than one million and covers approximately 2,000 square miles. A portion of that area, 473 square miles, is served by two wastewater reclamation facilities. One of them, the Ina Road Water Reclamation Facility (WRF), stands 4.6 miles north of the Roger Road WRF.

The Plant Interconnect pipeline connects the two reclamation plants. Construction of the big pipeline is part of Pima County’s Regional Optimization Master Plan, which includes an expansion of the Ina Road WRF to 50 million gallons per day (mgd), construction of a new 32-mgd reclamation campus at the old Roger Road WRF, odor control facilities, and the decommissioning of the old 41-mgd Roger Road WRF.

“For long-term reliability we decided to go with Hobas,” says Jaime Rivera, project manager for the Pima County Regional Wastewater Reclamation Department. “We briefly explored PVC pipe, but they don’t make it that big. So that narrowed our search to two choices, a T-Lock liner for concrete pipe or Hobas. We had some issues with constructability of the T-Lock liner, so it was less risky to use Hobas. It is corrosion resistant with no added-on lining.”

Rivera said the conventional design-bid-build process takes four to six months just to advertise the project for bids, select the low bidder, get the low bidder approved by the County Board of Administration, award the contract and issue a Notice to Proceed. Instead, the county selected the designer and construction manager at the same time and set a maximum amount it could spend to build the Plant Interconnect. The construction manager set $25.7 million as its guaranteed maximum construction cost – and in fact completed the project for less than that amount. (The $41.2 million cited above includes non-construction costs such as right-of-way, design costs and program management.)

During the design stage, Hobas engineering staff assisted in the preparation of lay drawings to identify the locations for fittings and deflected pipe joints to maintain the designed alignment, said Rene Garcia, EIT, senior engineering associate at Hobas. “We also provided input to the proposed installation method, and suggested trench details that would be easily constructible and provide the needed support for the pipe,” said Garcia.

Design was completed in January 2009, and construction Notice to Proceed was given that April. Construction began shortly thereafter, and reached substantial completion by December 2010.

Ease of Installation
Don Kelly Construction began construction at the north end, and used two crews to work southward, digging the trench and burying the pipe. Kelly used 28-foot long trench boxes stacked as necessary for the depth. Production in the sandy silt soil averaged about 250 feet per day per crew over the length of the project. “There were days when we worked the shallower reaches where a crew would average 400 feet per day,” says Jeff Hagen, Kelly’s general superintendent for the project. “And we laid as much as 500 feet or more on some days. We had 37 manholes to build and that takes some time.”

The Hobas pipe fit together well, Hagen said. “We generally lowered pipe into the ditch with a strap,” he said. “Depending on the situation, you can pull it home with that strap to make the joint. Or you can push on the end of the pipe with the excavator to join them together. It takes a bit of force because you want to make sure you get a good seal. The 60-inch pipe takes approximately 6,000 pounds of force to join the two pipes together.” Hobas uses gasket-sealed FWC couplings to join the pipe.

Rivera notes that for reaches that could have steeper grades, the engineer could specify the smaller 60-inch pipe instead of the 72-inch, because the water is flowing faster on a steeper grade.

Every joint in the Hobas pipe passed an air test of five psi as required by the Arizona Department of Environmental Quality, Rivera said. “We tested 100 percent of the joints and all but a couple of them passed the 5 psi test with no trouble. We quickly repaired the ones that did not pass and retested them with a favorable result.”

Hagen said the larger Hobas pipe was tested for deflection by using a wooden cross to measure any deflections (also called a go, no go stick). Smaller pipe could be tested with a mandrel. All pipe was installed below the five percent deflection limit. And finally, due to the tight grade requirements, the county ran a closed circuit television camera down the pipe, following some water poured into it, to measure dips and peaks. “We have to make sure there are no excessive dips in the line,” says Rivera. “Our standard is 1.75 inches and all pipe passed that test as well.”

The pipe was bedded in six inches of imported sand, and backfilled with sand up to one foot over the crown. Kelly compacted the sand backfill alongside the pipe with a tamping compactor, to provide side support. “The sand works well to get compaction so that those pipes will not deflect when you finish backfilling over the top of them,” Hagen said. “As long as you have side support, the Hobas pipe will not over-deflect on you.”

Like Hagen, Rivera had compliments for the Hobas pipe. Whereas the siphons were a challenge to build, the Hobas pipe was easy to install, Rivera said. “It was uneventful,” he concludes. 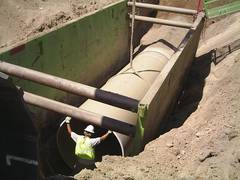 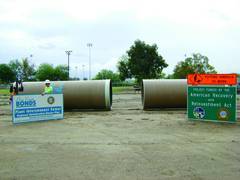 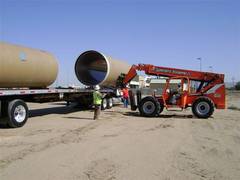