Tarrant Regional Water District (TRWD) located in the Dallas-Fort Worth metroplex area is one of the largest raw water suppliers in Texas. TRWD provides water to more than 1.7 million people within their North Central Service Area through four major water supply reservoirs. Due to an increase in demand, it was estimated that TRWD was in need of 600,000 acre-feet of water if they are not to fall short over the next 50 years.

Eagle Mountain Lake is located northwest of Fort Worth, Texas, in Tarrant County and has the capabilities to store 182,505 acre-feet of water. Located southeast of Eagle Mountain Lake are two major raw water reservoirs that were built to help the district meet current and future water supply demands: Richland-Chambers and Cedar Creek. Richland-Chambers Reservoir holds 1,136,600 acre-feet and Cedar Creek’s conservation storage is 644,785 acre-feet.

20-Foot Sections Assembled on Shore
Due to heavy recreation on Eagle Mountain Lake and the large diameter of pipe utilized, the subaqueous pipeline had to be located on the lake bottom and was required to be buried one foot above crown in order to protect against wave action and boating activities. The subaqueous section of the pipeline was placed in water depths up to 30 feet, with RCP and fiberglass pipe being the only materials allowed.

Garney Construction of Kansas City, Missouri, was awarded Contract B, installing the direct bury and tunnel sections. Garney Construction chose to subcontract the subaqueous section to Boyer, Inc. of Houston, Texas. Boyer has a background in subaqueous installations and a mobile marine fleet that easily breaks down for relocation to different job sites. The subaqueous section consisted of 700 linear feet of 78-inch HOBAS CCFRPM and an outlet structure constructed of steel.

Boyer’s installation plans allowed for 20-foot sections of HOBAS to be assembled on shore and pulled offshore by a 100-ton Link-Belt crane. Gordon Reavis, project manager, for Boyer explained, “A 300-foot slip trench was cut into the shoreline. After the slip trench reached a depth of six feet, crews utilized trench boxes and steel plates to take the slip to a total depth of 14 feet.”

Before the pipe could be laid and attached to the outlet structure, a trench had to be prepared on the lakebed. “They then began working on the open cut trench out in the lake utilizing a barge-mounted long-stick excavator to excavate a 12-foot deep V-notch trench in 20 feet of water. It was constructed with three to five-inch ballast rock covered with ¾-inch diameter crushed limestone,” stated Reavis.

“When the trench was prepared, the crews were ready to push the pipe into the trench on the lake floor,” Reavis continued. “Boyer utilized a specially constructed pushing frame placed at the back of the pipe string.” At the front of the pipe string they installed a six-foot-long sled that had two channel runners, configured so it would skate across the bottom as the pipe moved forward. Then two cables were attached to the 100-ton barge mounted crane that ran the full length of the pipe and then hooked up to the jacking plate at the back of the pipe string. The bridling was designed to keep the pipe in a straight line so that it would not deflect the pipe joints over the manufacturer’s recommendation.

FWC Joint Flexibility
Rene Garcia, senior engineering associate with HOBAS Pipe USA, noted, “One of the benefits of HOBAS’ FWC coupling joint is the capability for angular rotation. Based on the maximum one-inch gap allowed between the pipe end and the coupling center register, the 78-inch FWC is capable of 0.7 degrees of rotation while maintaining a positive seal. For a nominal 20-foot pipe length, rotating the 78-inch FWC joint to its maximum angle results in approximately three-inch offset.” One reason HOBAS pipes were selected for the subaqueous installation was their joint flexibility.

Specially made wrapped FWC couplings were designed for this project. “This method of installation required a long string with a bed that was never visible,” explained Reavis. “The FWC joints provided flexibility in each joint to minimize potential point loading. In addition, hole clips were attached at each joint to act as cable guides to control the string’s lateral path.”

The 700 linear feet of pipe was installed in two sections, a push of 400 feet was followed by the remaining 300 feet. Divers were needed only to attach the pipe to the outlet structure. This was done by a FWC coupling having been previously installed on the outlet structure, connecting the spigot end of the line.

Meets Tight Schedule
The use of HOBAS pipes allowed for a quick installation. “HOBAS was able to supply the pipe in a short duration and have it delivered to meet the extremely tight completion schedule. Boyer, Inc. selected HOBAS for its strength, size/weight ratio and durability for this installation technique,” affirmed Reavis. HOBAS CCFRPM pipes’ reliable performance and leak free joints insure a long service life.

HOBAS pipes were selected for the most difficult installation on the 19.8-mile line due to their leak-free and flexible joints. In addition, their ease of installation allowed for the 700 feet to be installed in just two days. Assistant director of engineering for TRWD, Ed Weaver, commented, “The subaqueous section of HOBAS is working well for us. We have had it under normal operating conditions, with a flow of about 53 mgd.” 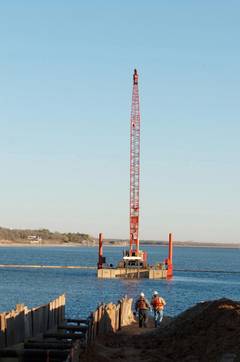 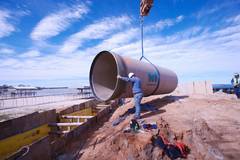 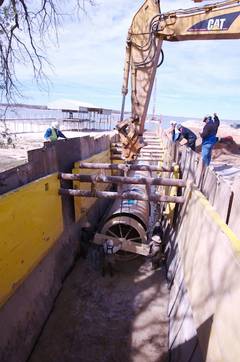